A question often asked on the Yahoo HexBeam discussion group is “what is the best height for my Hexbeam?”. It is difficult to answer the question without first understanding what the questioner means by “best”. As with any antenna, height above ground affects the tuning of the Hexbeam, its directivity and its matching; so the height which produces the lowest SWR might well be different from the height which produces best F/B or acceptable Gain.

To illustrate how a Hexbeam’s performance varies with height, a 20m Classic monobander was modelled at 5ft intervals between 10ft and 60ft over Real/Average ground [Results would have followed the same trends had a Broadband Hexbeam been modelled]. The following charts show the results. Assuming that most readers will be interested in the performance of the antenna over long distance paths, the Gain and F/B figures were modelled at a 5° take-off angle. The charts can be used to predict performance on other bands by scaling the height axis accordingly; for example on 10m the height axis would run from 5ft to 30ft. 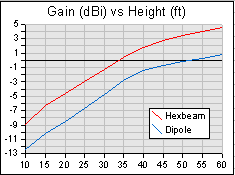 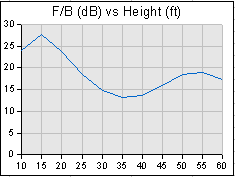 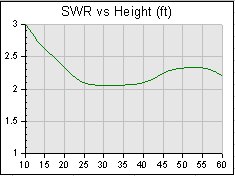 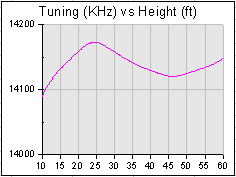 Looking at these charts in detail, we see that: 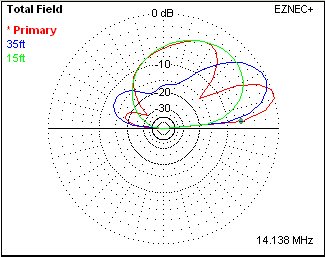 We came to the conclusion earlier that for low-angle work ‘higher is better’ as far as Forward Gain is concerned; however this is a simplification of a more complex picture.

The chart on the right shows elevation plots with the HexBeam at 55ft (red), 35ft (blue) and 15ft (Green). It shows how the elevation angle of the major lobe falls as the height is increased, producing stronger signals at the take-off angles typical of DX contacts (<10°). However, for short skip work (< 1000 miles) a height of 35ft would likely deliver better performance than 55ft.

Note that above 35ft a secondary lobe begins to appear at higher elevation angles – this could be a drawback if you were troubled by strong very-short-skip QRM.

It’s also worth noting that the “best” beam pattern for you could be very specific to your operating preferences and local environment. For example, here in the UK if I had a regular sked with a DX station in central Brazil but was suffering strong European QRM, I might be interested in maximising the beam’s response at 0° azimuth / 5° elevation and minimising it at -110° azimuth / 30° elevation. Simple F/B ratio figures will not be very informative in this situation – but a 3-dimensional analysis of the beam pattern at various heights would be.

Having said all that, many Radio Amateurs will wish simply to maximise their transmitted and received signals at low take-off angles; for them “Higher really is Better!”

For reference, the data in this table (extracted from the ARRl Antenna Handbook) shows the relationship between Distance and “Angle of Arrival” for typical F2 layer single-hop propagation paths. But see the Hexbeam Height (Part 2) page for a much more detailed study of arrival angles and their consequences for antenna height.